Latest news regarding camp: The hazardous trees have been cut down at camp, and they’ve done a good job of being careful not to harm any camp land, and only remove the tagged trees. We were there with the Mayor and the City staff and USFS, making sure every effort to keep as many trees as possible was made. The road around camp is open now, but the property itself is closed to the public. You can see a lot from the road, but please, DO NOT trespass and go on Camp property.  We will present some photos in our February town hall meeting.

As we announced at The Staff Show last Monday night, negotiations and the Master Plan process are coming along and everyone involved (The City of Berkeley, the Insurance company and the US Forest Service) is positive and working together to get us back to that location. We will know a LOT more in the late spring/early summer hopefully, as this process gets completed. But for now, signs are very good and moving in the right direction for us. Hurray for the Scott Ferris and his City of Berkeley staff who are working SO hard on this.

The summer of 2014 found us a lovely temporary home at Sierra Family Camp, at Echo Lake in Tahoe, and what a beautiful camp it is! The City of Berkeley moved staff, programs and traditions there for 5 weeks of family camp in the effort to keep Camp Tuolumne families and staff continuing to enjoy the summer together. The weeks were sold out, and after some challenges and adjustments in a new environment, the general overall feedback was that it was lovely to be at CAMP together, and as the Staff Show sang, “Camp Spirit is Everywhere”.. it is in the friendships, the trees, the freezing cold water, and the green adirondack chairs…

The new green chair circle up at Echo Lake.

There is still some availability to sign up for next summer!! Days are filling up, but you can get more information here: http://www.cityofberkeley.info/EchoLakeCamp/

2014 was a very big year for The Friends of Berkeley Camp!  5 new Board Members were added in the year as a few former Board members and founders moved to Emeritus Status, opening up positions for new energy and effort. Working with Board members who have been with the organization for 40 years, new Board President Steve Geahry guided the organization in updating its By-Laws and policies, creating new communication systems, organization tools and a new and improved web site.

This past November, FOBTC hired its first Executive Director in a part time capacity to continue to devote dedicated work time to the needs of the organization – advocacy with The National Forest Service, alliances with other stakeholders (City Camps, Yosemite Stanislaus Solutions, Tuolumne River Trust, other non-profit forest organizations, The City of Berkeley staff and policy makers), and the continuing effort to keep the Camp Community connected, informed, educated, and engaged.

In the summer and fall of 2014, FOBTC participated in the Rim Fire Recovery Technical Workshop in Sacramento, and in Sonora. We are at the table representing the voice of recreation camps and campers who come to enjoy the forest, reminding the Forest Service of the importance of our beloved Camp and its historical place in the Stanislaus National Forest. We were asked to be a part of the Yosemite Stanislaus Solutions Group, thee advocacy and policy organization for the Stanislaus Forest. We found the USFS to be people who deeply care about the forest and environment, sympathetic to our loss, and allies in our mutual goal to rebuild at our old site. These relationships take time to build, but they are growing and maturing into excellent partners who have a similar dream.

Since the fire in August of 2013, FOBTC has organized many events to keep the Camp Spirit strong and alive:

In October at The Berkeley Rep (2013 Staff Show); in April at The Freight and Salvage (Table Night and Update from The Mayor of Berkeley); in August, the One Year Anniversary Campfire in Cordinices Park and the 1 yr Candlelight Vigil in the Park; in Sept, at Tilden Park the First Annual Tee Off for Tuolumne! and The Solano Stroll, parading behind a rolling green chair; and finally, last Monday  December 22nd, the 2014 Staff Show, The Wizard of Echo Lake, sold out at The Osher Studio in Berkeley. All of these events kept our camp community connected, singing our songs, reuniting our campers, and all conveniently here in Berkeley! 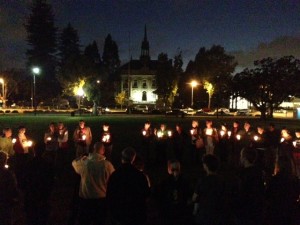 Tuesday Feb 10th 7pm – 9pm –  “Meet The Friends!” – a town hall meeting in Berkeley for the camper community to talk with and meet the Board of the Friends of Berkeley Camp and ask questions, get updates, express fears, concerns, issues, and be included in the process of rebuilding our camp. Location will be announced.

Coming in April –  “The State of The Stanislaus National Forest” – a presentation and update from the US Forest Service on our favorite forest after the Rim Fire, and how you can get involved if you want.

Saturday September 5th – The 2nd Annual Tee Off For Tuolumne! Fundraiser and Dinner/Auction 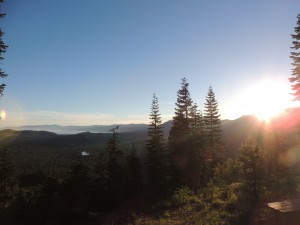 We love your support and hope you will get involved with us to further our mission to rebuild camp. You can make an end of the year tax-deductible donation by clicking on the Donate Here button, and/or let us know your email address and how you’d like to get involved, from event help to web site to community organizing, to fundraising.

Have a great holidays everyone and we look forward to the sun rising on 2015 with enthusiasm and optimism!

© Copyright - Friends of Berkeley Tuolumne Camp
Win an Authentic Adirondack Camp Chair at the Staff Show in Berkeley! Join FOBTC for an Update at our 1st Town Hall Meeting! 