Being on a staff at a summer camp is a rite of passage for millions of young Americans. It often brings a freedom and independence from their family that they have not known before, and a chance to be a responsible working adult for the first time. It is a glorious time of learning many new skills – how to find friends, how to be a competent worker, how to deal with the public, how to sign IRS forms and the joy of receiving a paycheck for hard work. Being at a summer camp far away in the mountains, it is a time for personal growth and connection with nature. It usually hard to work for too many years, as other jobs and growing responsibilities challenges the chance to be on staff again, but they remember those special summers the rest of their lives.

Staff consistency and retention is at the heartbeat of the business and spirit of Camp. At other family camps I have visited, the staff are not always the center of attention or at the core of the experience. Our staff has always been in the front – singing the songs, playing every game, becoming Superheroes every Saturday night in the staff show, cooking special dishes for special diets, serving every table with enthusiasm, and attending to any needs a camper has – whether the staff are off duty or in the department doesn’t matter. Seeing staff return to camp, and happy, keeps everyone feeling like nothing at camp has changed, and makes the administration and running of camp smooth and seamless. 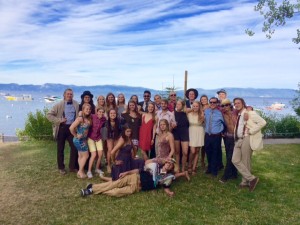 For the past 2 summers, Tuolumne Staff and Echo Lake staff have merged – and have worked through so many changes and physical differences to keep Camp similar for campers. It is a different camp at Echo Lake for sure. But the staff embraced the changes and continued the same joy we are so accustomed to, and this past summer was remarkable after just one year of working out the kinks.

These are mostly the same staff that fled in the fire, lost their belongings, were emotionally scarred, and for them, a part of their youth burned in that fire. We joked in the first week at Echo Lake last year that they are all pioneers at this new camp… figuring it out as they go along. A big thanks and kudos to the City staff (Scott, Denise and Craig) for putting the resources needed to basically sell out the summer of family camp, and also youth camp – and give staff the tools they needed to be successful! FOBTC also contributed resources and support to enhance the camper and staff experience for the past 2 summers, with the goal of sustaining a thriving camp business..

For decades and decades, a great summer traditionally ended in a great thank you dinner for the entire staff, sponsored and paid for by campers and The Friends of Berkeley Tuolumne Camp.

This year and last year were no different.

We now have a welcome packet, with envelopes and a safe to collect any donations at the camp office. This year we offered free “Rebuild Camp” t-shirts to anyone who gave a contribution towards this dinner. 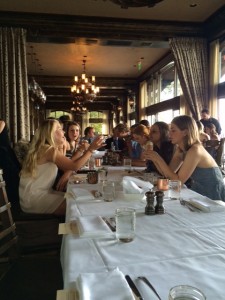 Instead of The Ahwahnee in Yosemite, they chose The West Shore Cafe in Lake Tahoe. A beautiful restaurant. They dress up in the finest for the only time of the summer. They go from sleeping on cots and the dirt all summer, from back packing and pitching tents on their days off, to elegance and upscale! And they always say it was the best evening of the summer!

So THANKS to everyone who contributed to this special dinner, and appreciation! Well done! Your donations and contributions mean a lot to the staff, and to the business of camp.