Hi Campers, Staff and Friends!  On Tues Nov 29th, 2016, the Parks, Recreation, and Waterfront division gave the City of Berkeley Council Members a full report on the progress and current status of their Camps division, as the City Council and Mayor get ready to make important decisions on the allocation of funds towards various needs and infrastructure projects. 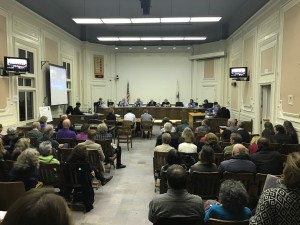 The Council Chambers were completely filled with Camp families and staff, overwhelming the space with standing room only supporters stretching out into the hallways. The Council were visibly moved by the support, and the testimony on how important Camp Tuolumne, Echo Lake and Cazadero Camps are to the citizens of Berkeley. Two-thirds or more of the attendees were there for Camp Tuolumne.

Click here to watch the video of the event.

(The Camps presentation begins 20 minutes into the video)

The Friends of Berkeley Tuolumne Camp were given a seat at the staff table and Richard Thomason, a Berkeley resident and FOBTC Board Member, spoke on behalf of the campers and our organization.

We promise to keep on fighting for the rebuilding of Camp as a high priority in the City of Berkeley as they near their budgetary decisions. The Mayor and Council were VERY supportive and said they will do everything they can to rebuild Camp as quickly as possible. We have planned meetings with every new council member, and the new Mayor, coming up.

Here is his testimony:

I’m Richard Thomason, a board member of Friends of Berkeley Tuolumne Camp and a 23-year resident of District 5. For 12 years, our family attended Tuolumne Camp for a week every summer with our Berkeley friends. In 2013, we evacuated out of camp ahead of the Rim Fire as ashes were falling out of the sky.

Our whole family was devastated at the loss of camp. Every summer, we had a magical week where we could connect with nature, unplug from work, spend time with friends and family, and let our kids run around in the woods with little supervision. I can’t tell you how important it was to my girls that we could let them have the gift of unstructured time at camp. Our girls learned so much there about independence, self-reliance, and community.

The Friends of Berkeley Tuolumne Camp (or FOBTC) was founded in 1984 to advocate on behalf of Tuolumne Camp. We were formed in response to plans to build a huge dam on the site of Camp, which would have flooded it under hundreds of feet of water. Working closely with hunters, environmentalists, the Tuolumne River Trust and other allies, we defeated plans for the dam and saved Tuolumne Camp.

We represent thousands of campers and staff, including hundreds of Berkeley households, spanning many generations of involvement over the 100-year history of camp. We are united in one goal – to help rebuild camp so that future generations of Berkeley kids can have the same formative experiences at camp that my children had.

Over the years, FOBTC has contributed tens of thousands of dollars to upgrade both Tuolumne Camp and Echo Lake Camp; has donated countless hours of volunteer labor to make improvements at camp; and has paid for the all-staff dinner at the end of the summer to promote staff morale.

We’ve also worked hard to keep the Tuolumne Camp traditions and community alive locally since the fire by hosting fundraisers, campfires, and meetings where Berkeley residents received updates on the rebuilding process from the Forest Service and the City.

We’ve worked closely with Parks and Recreation staff to participate in the planning process and bring the camper voice to the process. Going forward, we’re prepared to work with the City in a number of ways:

We want Tuolumne Camp to once again be that special place where Berkeley residents of all ages and all backgrounds can come together to create community in nature. We want camp again to be a place where Berkeley youth can have their first real jobs and learn valuable work and life skills. So FOBTC stands ready to partner with you and city staff to rebuild camp as soon as possible. To that end, we’d also be delighted to organize a tour of the camp site for councilmembers who haven’t seen it, including the new incoming members of the City Council. Thank you for your time.