“…when a Summer Camp Bums Down”

Somebody’s going to say that the destruction, by fire, of Berkeley Tuolumne Camp out near Yosemite is an indescribable loss. It isn’t. It’s very describable: infinitely. Everyone who ever went there can tell you what the loss means. They just won’t use the same words or phrases because everyone who went there, and we number in the thousands, will have their own take. This is mine.

Camp Tuolumne (too-ol-a-mee) was always going to burn down. That stretch of the Sierra Nevada’s is too hot and arid and inaccessible. The fact that camp lasted for 91 years is just about miraculous. It was never going to last forever.

To which statement you might reply, well, of course, sorry, but nothing lasts forever. Which means I wasn’t clear. The tent platforms, dining lodge, timber bridges, laundry room, bathrooms, arts and crafts area, dance hall, outdoor stage and slab-sided teepee were going to last only so long. But the Tuolumne that is a cloud castle of best self, campfire songs, first love, astonishment, fierce loyalty, second love, fishing awards, daring and discovery — that camp — that camp is as fireproof as youth and as indestructible as I don’t know what. Hope.

That said the loss of Camp Tuolumne is describable, and it is. It’s just not easily describable. It wasn’t a place or even an era. It was a dream, the scent of sun-baked pine needles, a culture of horse shoes and badminton, two weeks in July during which each day had a dozen moods, the dopey feeling of an afternoon nap in the heat on a cot under a war surplus canvas tent and the taser shock of cold water when you dive in and swim for Beaver Head Rock.

At Tuolumne, the pancakes were irrationally delicious, the college guys on the boys staff were Olympians, the girls staff was a blend of Miss Americas and the best big sisters you never had. Our campfire songs were the merriest, our family night skits were beyond witty. The camp store next to the volley ball court had ·the most exotic candy bars as well as cold drinks you could get no where else. Potato chips tasted better, comic books read better. In short, Tuolumne was Life and the other 50 weeks of the year were a time of weary exile when you grew pale and petty and so did everyone else.

When I was 12, I wrote myself a letter from camp. Camper Me urged my city self not go back to my other self, to keep the flame going, to hold onto the handsomeness, the lightness of being. The light.

Every pathway of memory leads me back to Tuolumne. None leads out.

My parents, Mildred and Carl Fay, were better people at camp. My father, a Berkeley fireman, was a product of the Great Depression and abandonment by his own father. By the time I came along in 1949, he had buried two infant daughters. His surviving children, six in all, were obligations and responsibilities, and he was a responsible dad. But he didn’t know you could have fun with your children.

Except at camp. Once we arrived at camp after the long drive, the backseat shoving and whining, the bickering and boredom and the very occasional barf, my dad shed his wary intensity, traded it for two weeks of rest, hikes, swimming (he swam at Tuolumne and no where else), naps, big meals in the lodge and singing. He would break into “My Fair Lady” or “Oklahoma” during Happy Hour.

After lunch and Quiet Hour, we emerged from our tent (they were more like cabins with canvas walls and roofs) for a bracing swim. As a very little boy, my dad took me swimming on his back. I hung onto his trapezoids as he muscled through a modified breast stroke, barely keeping his chin above water, his breath coming in measured gasps. Umm-pfff, umm-pfff. The skin on his broad back was baby smooth. It was the closest I ever got to him.

My mother’s transformation was more subtle, but still substantive. Most significant was her opening of a charge account at the camp store. We all could use it. It was an impossible benevolence; it made everything free: ping pong balls, badminton birdies, salmon eggs for trout fishing bait, Coke, fish hooks, Sea ‘n’ Ski, ice cream sandwiches, Mars bars. This was not the way it worked back home.

When I was tiny, I spent most of the day in mini-programs with beautifically patient staff girls. I learned to swim in the Minnows Program. Each year, a new accomplishment: assembling a B-17 bomber model from a kit, catching several rainbow trout (great name!), climbing to the top of Sawmill Mountain and leaping past a rattle snake and, when I was 14, kissing a girl on the lips. That’s as far as it went. But I wasn’t complaining.

Kids who came to camp year after year developed a loyalty, a chauvinism, that exceeded Japanese nationalism. We thought people who went to Oakland Camp or San Francisco’s Camp Mather or the San Jose Camp – all within several miles of Tuolumne – were hopeless losers. There was only one camp. 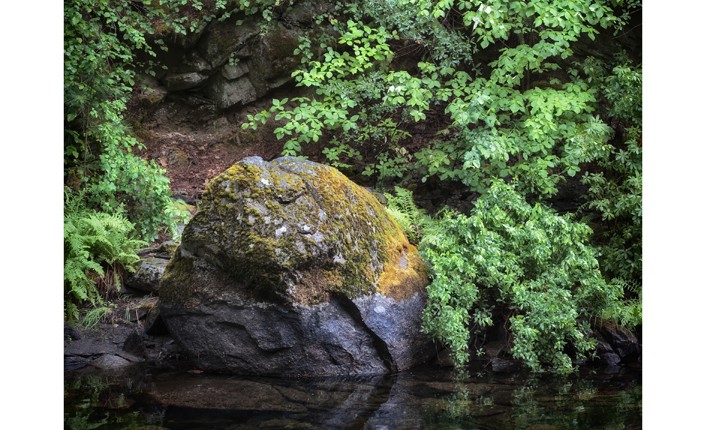 Without a camp fire, it ain’t camp. It’s a visit – at best, a picnic with swim. Camp fire seals the deal and Tuolumne camp fires unfailingly rocked. We gathered at 7:30. The boys staff guys would ignite the kind of inferno Incas used to sacrifice virgins: driftwood, logs and the super-sized pine cones that only Tuolumne’s super-sized sugar pines could birth. Bill Rhodes, the unflappable camp director throughout my childhood, stepped forward and, without preamble, started singing “Did You Ever See a Fishy on a Bright and Summer Day?” Three words into the song and we had all joined in. More songs followed, the lyrics known only to us campers. Then followed the evening’s entertainment .

Onto the rustic boards came the players. It depended on the day of the week . There was campers night, children’s night, table night, staff night and Aquacade … which took place down on the water with the girls staff doing an Esther Williams number at the base of Beaver Head. The night’s program always concluded with (need we say?) “Day is Done, Gone the Sun.”

Then to bed: sleeping bags under the stars. The stars. Even in the 1950s and ’60s, starlight was a rare species in Berkeley. At Tuolumne, the entire solar system was on show. My experience at camp was so life shaping, so, oh hell, so indelible, that I was primed and prepped when the Down East Family YMCA decided we needed a summer camp kids could call their own.

Cooper Friend led the fundraising charge. It took two years of asking people and banks and utility companies and newspapers and construction companies and foundations and each other for money. Our little group was motivated and heaven help the poor schmoe who asked me why I thought a summer camp was such a big deal …

Big deal? Only deal. I had promises to keep. Fifty-one years earlier I had received a letter from a skinny squirt with freckles and a goofy grin holding up a l0-inch rainbow trout he’d just caught . Don’t forget camp, he said. Like I was going to let Camper Me down?

I don’t think so.

Stephen Fay, managing editor of The Ellsworth American, is chairman of the Board of Directors of the James Russell Wiggins Down East Family YMCA.

© Copyright - Friends of Berkeley Tuolumne Camp
The Fall/Winter Report from The USFS! Want to Learn more about the reforestation of the Stanislaus Forest? 